Captive Slave for an Alpha Male: The Conclusion 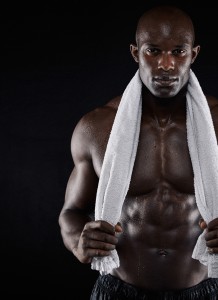 Your Alpha male master continued to pulse his hips, only now his hands were positioned to keep your head from moving in and out.  Your shoulders trembled with the effort of resisting the urge to bring your hands up to try and control how much of his cock went into your throat, and how quickly.  You begged for patience with your eyes, and may have even whimpered a little bit, but that only seemed to induce him to redouble the force he exerted in his thrust and grip.  Every one of his washboard abs stood out sharply as he concentrated the strength of his core into it.  Your view of him clouded as your eyes began to water.  The saliva that had accumulated in your mouth had nowhere to go, and since you couldn’t swallow, began to trickle in silvery strings out of both corners.  You could feel your nose begin to run, and your face to get hot, knowing it was turning red with the strain.

“Stick that tongue out,” he commanded, in a tone slightly strangled with effort and pleasure.  Your clit twitched in acknowledgement, and you slowly managed to squeeze your tongue out between your bottom lip and the underside of his big cock.  Immediately the head, now swollen to the size of a plum, somehow popped into your throat hole, and you tensed again out of pure reflex.  Your throat seemed to seize up with the effort of expelling him, but he, like the Alpha male master he was, held steady.  He continued to drive more, inch by inch, into your gullet.  “Suck it,” he repeated, this time in a tone that sounded more like a warning, translated in your mind to “Don’t you dare spit it out.”

Admit it:  You are in love with this Alpha male cock.

The only reply you could manage was a deep, wet, prolonged, retching gag that was accompanied by a small waterfall of spit from the corners of your mouth where only strings had been.  He continued to thrust, and every third one or so was accompanied by another gag, your eyes by now rolling in the sockets a bit and streaming, the cords standing out in your neck, your whole body trembling with the effort of being a good boy.  Strangely, the struggle of your body was accompanied by a rush of emotion your mind tried to resist unsuccessfully:  you were falling in love.  In love with the man, no.  Not yet at least, though you would soon develop a slavish devotion to him that was very much like love.  Maybe a beta boy like you can’t be “turned gay“, but you were gay for that Alpha male cock. Not just physically, but emotionally involved. The completeness with which he penetrated your throat pussy, the total domination with which he controlled you, the taste and smell and feel of him, stole what ever passes for a beta boy’s cock-craving, submissive heart, likely located in the center of the prostate.

He widened his stance and deepened his thrusts, and even with your water-blinded eyes you could see his muscular chest rise and fall with passion. If you’d had the presence of mind to think about it, you would have been amazed when you finally began to feel his skin lightly touch the tip of your nose, but slight oxygen deprivation (it’s hard to remember to breathe through your nose, isn’t it, cocksucker?) and the disorientation of surrender were taking all of your attention.  You were brought back to the present moment, however, when your nose flattened out against his pelvis completely, and a new round of shuddering accompanied the realization that this Alpha male stud had managed with his sheer dominant will to bury every inch of his cock down your throat.

“Goddamn, faggot!” he hissed, “Open that throat up.  Goddamn.”

Giving him pleasure was like a drug, beta boy.

You responded to his obvious expression of pleasure with a lust for more.  You shakily, slowly began sweeping your straining tongue back and forth across as much of his nut sack as the cramped circumstances would allow.  Faggot, you even attempted to swallow and suck at the same time.  Every muscle in his body tensed and bulged with the effort of holding you in tightly, of a display of power and a greed for the pleasure of the sensation.  After all, being deep throated isn’t something a man with a large cock often gets to enjoy.  It’s something they usually wouldn’t demand of the treasured, pampered women in their lives.  But beta boys like you are a different story, faggot. It’s your place to be used, with little regard for your comfort.

The still-running showers made a sort of symphony with his deep breaths and your now almost lazy gags, lazy, as if your body realized that there would be no relief from the pulsing mass that was plugging your throat so that a gag reflex wasn’t something to which it was worth committing.  The tension in your body slackened as well, and a small snot bubble slowly expanded from the tiny portion of one nostril left open. “Fuck, bitch.” he whispered.

Gradually, his hips began to pulse once again, and the pressure of his hands holding you to him lessened to allow it.  This caused the tension in your body to return, since now he was oozing more and more of his massive, swollen dong in and out of your throat pussy.  Your hands popped out from under your ass and hovered uncertainly in the air at your sides, but he didn’t seem to notice.  His thrusts got faster and faster, and soon you could feel his spit-glazed nut sack slapping up against your chin.  You realized that at this point it didn’t matter if you grabbed his hips, because you were no match from the insistent frenzy of strength he was exerting in fucking your face.  You then knew that the term “skull fuck” was not an exaggeration.

His cock was pounding in and out of your throat pussy too fast to allow you to gag, cock whore, but the convulsions of your throat caused explosions of air to rocket out of your nostrils, and the skull fucking produced a gluck gluck gluck, similar to the sound a man’s hand makes when he strokes his lubed cock at full tilt, but with the addition of your phonetic vocalizations of the sound.  Your body switched back and forth between tension and limp resignation, but you managed, with a mindless cocksucker’s determination, to maintain suction.  Every once in a while, your Alpha male master would reward your efforts with a moan or a curse of pleasure.  And even though it was your first time sucking cock, a real cock, an Alpha male cock, you began to recognize the signs of the moment you’d only wanked to before now:  He was going to cum.

You squeezed your eyes shut tightly to try to clear them, because you wanted to see the ecstasy on his face. You wanted to see as well as to taste and hear and feel that you’d been a good boy.  Your efforts were rewarded somewhat, because you could see him just enough to know that your instincts were right.  His lips were parted and his teeth barred.  His eyes squinted with intensity and concentration.  You could feel that big cock throbbing and flexing way deep down.  At that point you couldn’t even remember how you got into this situation, what had come before, and you didn’t care what came after.  All you could think about in the tension of that moment was your longing to please him.

Suddenly he exerted that same muscle-flexing power and crammed the entire throbbing length of his cock all the way down, crushing your nostrils shut against him.  This time your hands did come up to his hips, and once again it was futile.  He was silent, but the insistence of his body was deafening.  It seemed as if your heartbeat and the pulsing of his cock were in unison.  You tried your best to stroke the root of his cock with your lips, and after what seemed like an eternity of anticipation and strain, your throat was getting flooded with an impossible amount of ejaculate.

You understood the implications, the warning against failure to comply, but you also felt a surge of longing, devotion, submission, and joy.  It wouldn’t be the last time.  Every week you would be allowed to be who you really were, who you were meant to be, despite who you pretended to be to the rest of the world.  The bonds had been firmly lashed around you, and they felt unbreakable.  Whether you never knew his name, whether you only saw him once a week and were left longing for more, you were now his slave, wearing a collar whose leash he held firmly, wherever he was.  You thought you could get away with being a beta male meat-gazer forever, but you became a cock-servicer in permanent captivity to an Alpha male that day.

Long posts like these aren’t for everyone, but if the E-mails I’ve been getting are any indication, there are a lot of closet cock suckers who enjoyed this series, living vicariously through this captive beta male slave!  I have a head full of dirty stories that I just have to share sometimes, and I’m glad to have a place to indulge Myself!