My Brief Time With Bill, the Pass-around Chastity Slave! 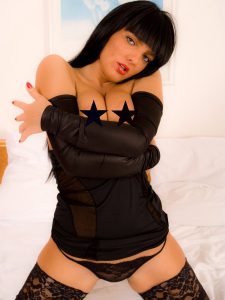 You don’t have to be a chastity slave, but he was!

Bill first came to LDW for help in learning surrender, namely, surrender of his cock and orgasms. Bill, like many of you, greets the world each day with the assumption of propriety in the face of his fellow citizens and colleagues, but make no mistake: Bill is a stroke whore. Left to his own devices, he would miss no opportunity to stroke his dick raw. A compulsive masturbator? Yes. But it’s more than a pathological inability to keep his hands to himself. Bill is used to being in control in his life, and whether he intends it or not, his insistence on greedily spilling cum at the inducement of his pumping palm is an attempt to keep control. Therefore, he was wisely clapped in chastity by Mistress Erika.

Just because he was cock locked, however, it didn’t mean his mind was as submitted as it should be. He cried out for additional training to remind him of who he is, day or night: the torment toy for dominant women!

What training? Read on!

Doses of chastity slave reality on the hour!

What was decided and organized between Miss Erika and Miss Heather was that as many Mistresses as could be arranged would call Bill overnight, without him knowing when or with whom he would be speaking, and give him ten minutes of teasing torment and training at a time. Now, I tend to be a bit wary of sleep disruption from a health perspective, but I admit that the thought of slapping a slut out of slumber when they least expect it, when they are disoriented and vulnerable, and putting them through their paces, appealed to My sadistic streak.

Think of it like being in the hospital, where your nurse might have to wake you several times during the night to administer medication or take your vitals. We did the same, all in the interests of putting Bill in his place!

When I took My turn, I called Bill via Skype. He appeared in a pretty pink-with-black polka dot bra and panty set, bulging in a tell-tale manner from his firmly locked chastity cage. I had him reveal it to Me, along with his swollen balls, blushed from a CBT beating. I discovered that Bill’s cage had just enough room to allow him to slide it back and forth on his imprisoned subbie meat, just enough to arouse. Of course, it swelled, until there wasn’t one iota of space left in which he could expand. I wanted him to go back to bed fully cognizant of his inability to stroke, of the forbidden orgasm he would not be able to stimulate himself enough to reach, and leaving him straining against the cage was one way to do so.

You know what the teasing torment I visited upon him revealed? Bill drips precum like a faucet! As soon as I had him shimmy that plastic tube up and down, he began to positively run with fuckjuice! Now, a submissive male can’t be allowed to make a mess like that, can he? As much of a premium as orgasms are for a chastity slave, he should be grateful to even be allowed to plump up like that, much less experience enough pleasure to make his cock ooze. Therefore, of course, he was induced to clean up his mess, to lick it up as quickly as it dropped out!

Bill must have produced and slurped up a good couple of tablespoons of slut squeezings from the end of his cage and his fingers!

There’s so much more I would have and could have done with Bill, since by My place in the gauntlet his brain and boy parts had been well-tenderized. And he still had a few Mistresses to meet during the night watch! But alas, I only had 10 minutes with him, and it was soon time to pass him along to whatever the next Mistress had in store.

If you’d like to experience a custom collective control experience, get in touch with Me to describe your fantasy, or any Mistress you’d like to take the helm! Our help desk can be instrumental in helping you suss out which Mistresses would be best to assist you in your specialized training, and when they are available.

P.S., Visit Miss Erika’s blog to read up on Her take on our erotically bullied Bill!

P.P.S., Bill sent Me the sweetest E-mail giving his impressions of O/ur time together, and of this post:

Thank you, Mistress Rachel, for sharing our story and for the unforgettable experience I had on that journey of incredible wake up calls. You and all the Mistresses who participated were amazing! I’ve been calling LDW for more than a decade, but this experience was over the top mind-blowing, but certainly not for that poor cock. As I write, I’ve been locked up for the past two days, feeling the pressure, loss of control, and dripping with anticipation for the future. Your description of our session was not only perfect account of our brief time together, it’s allowing me to relive it through your eyes and my humiliation. By the way my device is a CB6000S, when you woke me, I pressed in the cage, but you made me bulge through every vent of that torturous device by forcing a painful erection! It will be an honor and thrill to have you train and torment me in the future. Thank you!
submissively yours