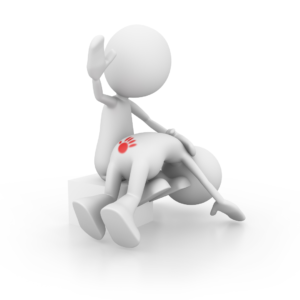 First, I think it’s emasculating. When I put an adult male slave over My lap, bottom naked and exposed, penis dangling down between My thighs, he is made to experience a brand of vulnerability and embarrassment that he likely hasn’t experienced in a long, long time.

Those who were raised with corporeal punishment remember the moment when they grew “too big to be spanked”. This distinction isn’t just a physical one. When a person becomes aware of concepts like privacy and personal dignity, as well as their right to claim them, one may say they’ve grown out of being spanked. The disciplinarian usually becomes instinctively aware of the onset of this time, and spanking as a means of behavior correction stops.

Coercing a grown man into a position he thought he aged out of is like stripping him of the particular brand of autonomy that adulthood supposedly confers. To most people, perhaps the image of the emasculated submissive usually translates to a male rendered effectively female, but it can also refer to a man demoted back down to the status of boy, and at no time in the realm of spanking humiliation is this more clear than when the spanking is administered bare bottom and over-the-knee.

Between the blushed ass cheeks is the asshole of course. It adds something especially satisfying to pause mid-spank and violate that hole. I’ve got My fingers, or even the smooth, rounded handle of the hairbrush at My disposal.

Sometimes I like to squeeze an ass plug into place before spanking commences. Blows to the assmeat usually cause reflexive contracting of the asshole. Thus, the slave becomes acutely aware of this secondary form of the violation of his autonomy 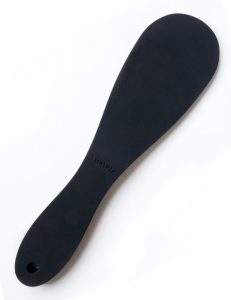 Shaped like a hairbrush on purpose! Click the pic if you’re in the market for a spanking paddle!

Also there’s that dangling cock and vulnerable balls. The balls are conveniently located so that I can pull them back through his legs and sandwich them between his thighs. Inevitably, some of the blows land at least partially on the nutsack. If I don’t pull the balls back, the pressure exerted from underneath by My strategically-placed thigh, exacerbated from time to time by the bowing of a spank-boy’s body in response to discomfort, adds a nice little touch of cock and ball torment.

The cock and balls can also be squeezed between My thighs for either mild cbt or a rather intense form of cockteasing, especially if I’m wearing stockings. These provide stimulation at turns abrasive and tickling. If the subject of spanking humiliation is a pain piggy, he will probably be erect. This gives him a thrill of humiliation all by itself, and leaves him open to other kinds of teasing and denial.

So there you have it, readers.  Whose cock tingles at the thought of an over-the-knee spanking? Do you relate to the above? Why does it arouse you so much? Do you prefer a hand, or a hairbrush?

*I like to either put a collar on a slave, cuff his wrists behind his back, and then attach collar to cuffs with a length of bondage rope, or tie his wrists to the legs of the straight back chair, or simply cuff them in the front. Front cuffing his best, because then his arms are out of the way altogether, but the collar-and-cuffs method is arousing to look at, and tends to deepen a spank slave’s sense of helplessness. Cuffing the ankles together loosely tends to minimize the efficacy of kicking.